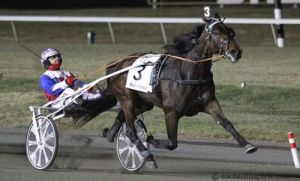 Shake It Cerry winning the Breeders Crown $500,000 Three-Year-Old Filly Trot in a harness racing stakes-record 1:52.2 mile at the Meadowlands

For the fourth time in his Hall of Fame career, Jimmy Takter is the Trainer of the Year as voted upon by the members of the U.S. Harness Writers Association.

Three-year-old filly, Shake It Cerry was named the Dan Patch Award Trotter of the Year, while Pinkman and Father Patrick received divisional honors. All three horses trained by Takter. 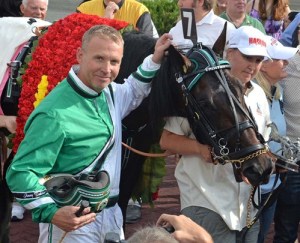 A victorious Takter and Trixton at the 2014 Hambletonian

Takter, 54, won this year’s Hambletonian with Trixton, a horse he drove himself to the victory, and the Hambletonian Oaks with Lifetime Pursuit. Takter became only the second trainer to win both races in the same year, joining Jan Johnson from 1988.

The Hambletonian was the first jewel in the Trotting Triple Crown and Takter-trained Nuncio swept the remaining two legs, the Kentucky Futurity and Yonkers Trot.

Father Patrick and Nuncio made Takter the first trainer in history to have two million-dollar trotters in the same division in the same year.

Among Takter’s top pacers were 3-year-old male stakes-winners Lyonssomewhere, who captured the Cane Pace, Somewhere In L A and Tellitlikeitis, along with 3-year-old filly stakes-winner Uffizi Hanover.

Takter will receive his award at USHWA’s annual Dan Patch Awards banquet, to be held Sunday (Feb. 22) at the Doubletree Hilton Orlando at Sea World.

Let’s Talk About Web: Razer Horseshoes »
« How to Measure Your Horse’s Hoof & Select a Size